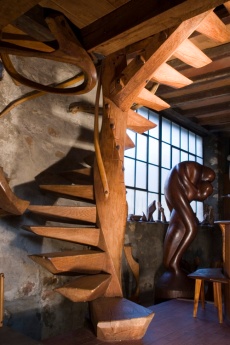 There are sometimes long periods between my posts. This time it has been unusually long. However, as I have returned to Brownsville and  visiting the libraries here and preparing for classes, I came across a very good book:
Wharton Esherick: The Journey of a Creative Mind
By Mansfield Bascom
Publisher Harry N. Abrams, 2010
ISBN 0810995751, 9780810995758
Length 276 pages

I have been moderately aware of Wharton Esherick’s work and have come across it on several occasions. Without reading or knowing much about his work, other than an article I clipped and saved years ago, I thought to myself how he had some stylistic characteristics in his work that reminded me of other artists influenced by Rudolf Steiner and the impulses coming from Anthroposophical art. This could be said of many 20th century artists that only ever encountered these indirectly. I was not sure which was true about Esherick. Recently I found his biography, written upon request by his son-in-law, Mansfield Bascom, in The UTRGV library in Brownsville. 6 pages in the Book briefly reference Steiner in several places indicating that he had been influenced by Steiner. Apparently from the writing it was a direct influence not so much from Steiner’s verbal teachings, but from the artistic expressions, Eurythmy, the architectural and sculptural forms, and specifically the Group sculpture.

Here is yet another 20th artist, a modernist, and an American, that can be linked to the influences of Anthroposophy, with some obvious innate affinity, even if it is not an affinity with Steiner’s occult teachings. In a way, this is paradoxical, because art is often the most occult of teachers or teachings. I have noticed this is often the case and it goes along with what Steiner has said on occasion. One does not make converts by forcing ideas on those who have already long been on a distinctive path of their own. Athroposophy from the beginnings has mingled with other paths. The Bauhaus is a prime example where Anthroposophy has an influence but is not the only influence at work. It is important to remember that Steiner stated it matters most that art express the spirit and that specific style was less important.

I have decided to retire the Hilma af Klint page for a while for various reasons until I can adequately access the works and make sure the images are in the public domain. Until then here is a link to the Google search for her work: Hilma af Klint.